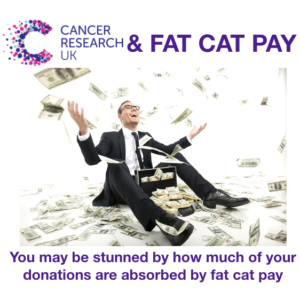 We have exposed the lack of transparency Cancer Research UK has when it comes to where your donations go on numerous occasions. We have exposed the creative exclusion  of certain income streams which give the impression that a higher percentage of funds raised support research than actually do. We exposed possible fraud, misinformation, hypocrisy, and more. Now, we turn our attention to how much of the money the public give to CRUK funds not research, but fat cat salaries. You may be surprised.

Using that same calculation, how many people donating “just £2 per month” does it take to pay CRUK’s top earners?

Starting at the very top, CRUK’s top five earners receive over £1 million between them each year. Yes, you read that correctly. Over £1 million.

According to the 10 Percent Campaign, a further 219 CRUK employees earn over £60,000 per annum. This is up from 160 in 2013 and second only to Save The Children, and three times more than the next highest.

Let’s add the top five earners £1 million and then calculate on costs to understand how much CRUK needs to raise just to fund these positions BEFORE it funds any other jobs, offices, marketing……..oh yes, and research.

The figure is a mind boggling £24,745,000. Yes, you read that correctly, nearly £25 million, and remember our calculation is on the LOW side. Paying that amount would require over 1 million people to donate “just £2 a month’ for the full year. One million. Just to pay their top salary earners.

And these 224 employees make up less than 6% of CRUK’s total workforce of 3964. Again, yes, you read that correctly. Nearly 4000 people need paying, 224 at mind boggling rates, before a single penny funds the research you thought you were supporting.

And then, the cost of making that “just £2 a month” commercial, CRUK’s other slick marketing, office costs, a legal team the size of which would make many corporates blush, and more, and much more, also come before any research is funded.

When you donate your hard earned money, it is worth considering what you are supporting. Is it research into cancer or a large, slick machine, which misleads, misrepresents, and which acts both hypocritically and unethically, lying about the origins of its own largest fundraising event (the Race for Life).

Figures are for 2016 salaries.