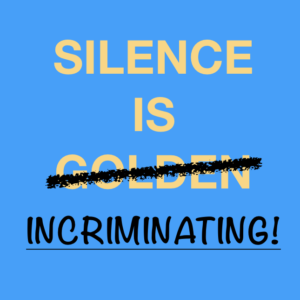 In the relatively short space of time since we set up the Race 4 Truth we have uncovered and shared numerous instances of Cancer Research UK lying, being hypocritical, supporting fraud, demonstrating poor ethics and low integrity, misleading supporters, and more. All of this in addition to their continued refusal to recognise the man who created the Race for Life.

In response, the silence from Cancer Research UK has been deafening. But that silence speaks volumes.

Some might suggest that silence is golden but in this instance, we would suggest it is far from that, instead incriminating Cancer Research UK by their failure to offer any explanation of their actions or any defence to the many issues we have raised.

They are one of the UK’s largest charities with their own big in-house legal department. Yet they have offered no explanation and defence to any of the many issues we have uncovered. No defence to the lies (both blatant and by omission), the hypocrisy, the possible fraud, and more. Surely an innocent party would react, would respond?

But no, they haven’t.

But then, when you are not innocent, what can you say? What possible evidence can you offer? Maybe Cancer Research UK think silence is the best option? Maybe they think eventually we will give up and go away?

We won’t. Not until Cancer Research UK do the right thing and recognise Jim Cowan for creating the Race for Life instead of lying about it, making up fiction about it, hypocritically accepting recognition for themselves, and supporting fraudulent claims about it.

The continued silence from Cancer Research UK speaks volumes and serves only to incriminate them.