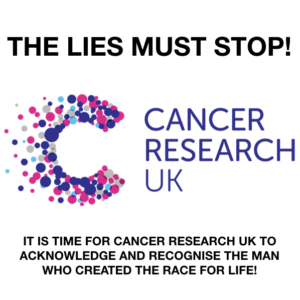 Imagine creating a groundbreaking new fundraising event, one which goes on to raise over £1/2 Billion for the charity you shared it with and which changed the fundraising landscape in the UK for good, creating a type of event which has raised many times more than that for hundreds of charities.

Now, imagine you are going for a job and the charity you took your creation to, the one that has raised over £1/2 Billion through it, denied ever having heard of you making your CV look a lie and costing you the job.

How would you feel?

It is 25 years since Jim Cowan came up with the idea for the Race for Life and for 23 of those years Cancer Research UK (and their predecessor the Imperial Cancer Research Fund) have denied Jim had anything to do with the event. They have misrepresented its roots, created false stories, and supported the fraud of someone who lied about having created the event for her own career advancement.

Jim had tolerated the lies, the hypocrisy, the fraud, and the misrepresentations but finally, enough was enough. In may 2018 he vented that frustration on his Facebook timeline.

His post led to an outpouring of support from his friends, and from people he has never met.

Having read the post, we decided the best support we could offer Jim was to run a campaign to uncover the truth and demand Jim receive the recognition he deserves. Jim agreed to our idea and has been (and will be) allowing us to share copies of evidence from the event’s beginnings and from the intervening years.

Jim has also consented to our copying the post he put on Facebook in May, the post which led to such a big outpouring of support and which motivated us to start this campaign. That post read:

“Is there a charity with less integrity than Cancer Research UK?

I thought long and hard before posting this but I am fed up with this charity and their campaign of lies about the origins of the Race for Life. Up to now I have been frustrated by it, annoyed by it, and (of course) missed out of the recognition due for being the creator of the event and, some might say, the change in the UK charity fundraising landscape that came with it.

But now their lie is adversely affecting my next career move.

Yesterday, I received a phone call from the HR department of a large charity at which I had recently been interviewed for a new role. The call was to inform me that, although they felt I was by far the best candidate, they would not be offering me the role.

The reason? They had contacted some of the charities on my CV to check my history and all but one had checked out. The one? Cancer Research UK claimed to have never heard of me and denied I had ever had anything to do with the Race for Life.

AND EXPOSING THE LYING IS WHAT RACE 4 TRUTH SETS OUT TO DO!