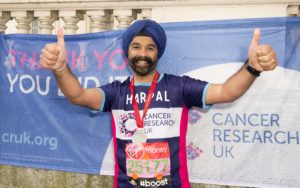 On 10th May, Race 4 Truth supporter Pete Brindle emailed Sir Harpal Kumar, the CEO of Cancer Research UK, to express his disappointment at the charity’s refusal to acknowledge Jim Cowan for creating the Race for Life and, as a result, to notify him that he was withdrawing his support. You can read that email here.

Yesterday (29th May), Pete got in touch to let us know that he has received a reply from Kumar. This is what he wrote:

My apologies for the delay in responding to your email advising us that you are cancelling your regular donation to Cancer Research UK. I’m sorry that you feel this way but pleased that a smaller charity in the same sector will now benefit from your support.

You are quite right that our Race 4 Life event series is significant in both its popularity with our supporters and in the funds raised over the years towards our research into the prevention, diagnosis and treatment of all types of cancer. However, we do not credit anyone with originating any of our events, but choose instead to focus on making them as successful as possible to fund our life-saving work.

Unfortunately, I am unable to comment specifically about the content of your email concerning Mr Cowan’s involvement, as this is a personal matter between Cancer Research UK and Mr Cowan.

Thank you for the support you have provided to Cancer Research UK to date. It is very much appreciated.

While we thank Kumar for taking the time to reply to Pete, his response, while disappointing, is not unexpected.

On 18th May, we reported how many different versions Cancer Research UK had for who created the Race for Life (and those were just the ones we could trace).

After years of (not unsurprisingly given they were not telling the truth) being unable to tell a consistent story, we reported that they now appeared to have a policy of reporting that they, “do not credit anyone with originating the event.” That policy has been their consistent line since last year; barring one new (and false) claim from their National Events Manager Annette Quarry earlier this month.

We also note the comment that this, “is a personal matter between Cancer Research UK and Mr Cowan.”

They are right. It is VERY personal. Especially when Cancer Research UK are costing Mr Cowan jobs by denying they have ever heard of him, thus bringing his (honest) CV into question. Perhaps Kumar would like to enlighten us as to why?

Sir Harpal Kumar’s response is telling. In refusing to credit anyone with the creation of the Race for Life, he avoids lying about the event’s true origins in the way the charity has done for nearly a quarter of a century. It is worth noting that he chooses not to deny that Jim Cowan created the event. Why not, if previous CRUK yarns were true?

If, like Pete, you would like to withdraw your support for Cancer Research UK in light of our campaign, please do not stop supporting vital research into cancer via other charities.